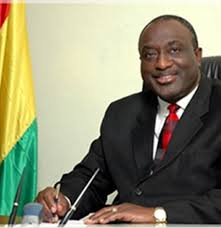 Ghana is set to generate US$10 billion from Non-Traditional Exports (NTEs) in the next four years, Chief Executive Officer of the Ghana Export Promotion Authority (GEPA), disclosed on Wednesday, as directed by the Minister of Trade & Industry, Alan Kyeremanteng.

To achieve the target, Gifty Klenam a spokesperson for the Minister, said, the Authority was developing and promoting exports vigorously, by identifying additional products with significant export potentials in the various districts in the country.

(NTEs) to include all export products with the exception of cocoa beans, lumber and logs, unprocessed gold and other minerals, and electricity.
Madam Klenam said this in a speech read on her behalf, at a meeting on the implementation of the National Export Strategy, vis-à-vis the One – District-One-Exportable-Product in Sunyani.

It was organized by GEPA and attended by District Chief Executives, Coordinating Directors and other stakeholders in the export sector and aimed at identifying new export products in the various districts of the Brong-Ahafo Region.

The National Export Strategy was launched in 2013 for implementation after extensive consultation and its key tenets advocate the identification, development, and promotion of at least one exportable product per district.
Madam Klenam indicated that the nation had all it takes to be the export hub of the sub-region and underlined the need for stakeholders in the sector to help tap export products to transform the fortunes of the country.

She said currently GEPA was undergoing certain structural and fundamental realignment to be able to handle new responsibilities adding that very soon regional offices would be established for the full implementation of the one-district-one-export-product.

“This program would complement as well as feed the implementation of the government’s overarching policy initiative of the One-District-One-Factory industrialization concept”, she explained. Madam Klenam observed that Brong-Ahafo was vast and endowed with immense potentials for agribusiness, services and related export value chains. “The region has been touted as the food basket of the country and the onus lay on us to translate this positive accolade into meaningful exports”, she told the participants.

The Ghana Export Promotion Authority (GEPA) is seeking to boost the export of non-traditional products within the short to medium term. As part of achieving this aim, the GEPA has introduced a new marketing platform for exporters of such traditional products.

The new market hub is also expected to expose exporters to modern developments and increase their share at the global level. The Deputy CEO of the Ghana Export Promotion Authority, Eric Amoako Twum tells Citi Business News the move should leverage Ghana’s position on the export markets.

“The market hub is essentially to create the platform for the various stakeholders in the export sector to interact; most importantly buyers and sellers to come together. Because we deal with a global market stage, it is important that we create a platform where people will be able to one project and showcase Ghanaian products.”

Mr. Amoako Twum added, “Also that the Ghanaian exporters will themselves get the opportunities to glean information from other important databases and get information on markets that they deal with or those that they have the potential to venture.”
Ghana is seeking to increase its nontraditional exports to 10 billion dollars by 2020.This is also to help improve the balance of payment. Latest figures released by the Bank of Ghana show that the country’s imports have reached 9.3 billion dollars as at October 2017.